Acrylamide monomer is produced by hydration of acrylonitrile (ACN). It is the raw material to produce polyacrylamide and is manufactured by more than 15 major producers. Biosynthetic route is the most widely used process for acrylamides commercial synthesis. It can also be synthesized by synthetic route. The bio-synthesis route has been preferred over the synthetic route due to its cost-efficiency. It uses immobilized nitrile hydratase biocatalyst while the synthetic route uses the costlier copper oxide catalyst. Polyacrylamide is the principal derivative of acrylamide accounting for 90% of its consumption. Any impact on polyacrylamide end-use applications market like water treatment, oil production and others will impact the global acrylamide demand. 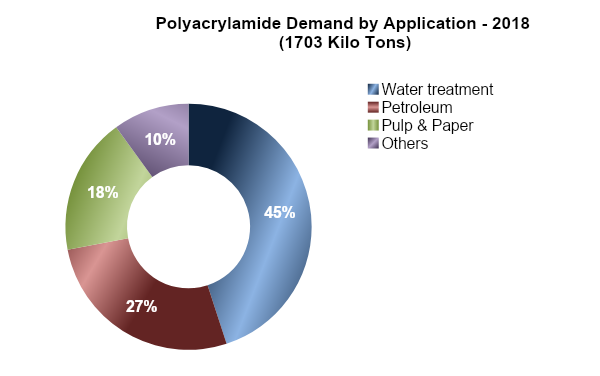 The demand for acrylamide has been growing between 3% to 5% during the last few years and the global demand in 2018 was estimated to be around 1703 kilo tons. About 45% of this demand comes in from water treatment applications while petroleum and paper & pulp together account for 45%. The remaining demand is mostly from other small volume applications like textiles and mineral processing.  The water treatment applications are expected to witness the fastest growth during the forecast period followed by polyacrylamide applications in the petroleum industry to enhance oil recovery and in other petroleum production processes. 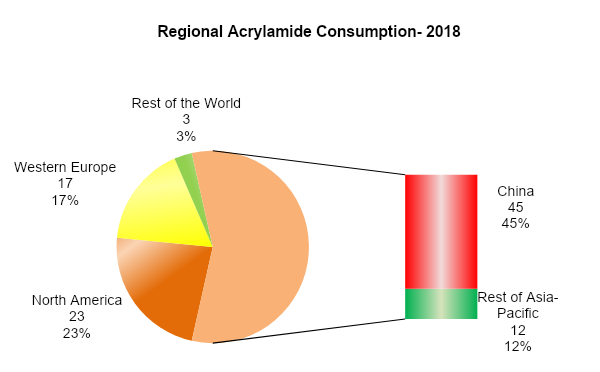 Historically, Asia-Pacific has been the largest demand region as well as the largest producer region and is likely to remain so even in the forecast period. The global acrylamide market is driven by Asia-Pacific, particularly due to the strong demand for water treatment applications in China, followed by major demand in Japan and other developing Asian countries on the back of the presence of large paper and pulp industries. The region accounts for about 57% of the global acrylamide consumption and China alone holds for 79% of total regional consumption. This (China’s consumption)translates to roughly 45% of the global demand. North America is the second largest region accounting for 23% closely followed by Western Europe with 17%share. Central & South America, Central & Eastern Europe and MiddleEast & Africa together account for 3% of total global consumption.

Acrylamide production is concentrated majorly in three regions viz. North America, Western Europe and Asia-Pacific. China is the largest producer of acrylamide, accounting for about 62% of the global acrylamide production mainly dominated by local producers. SNF, CNPC and Kemiraare the major players of acrylamide globally. SNF is the largest manufacturer of acrylamide with more than 5 production locations globally. New major capacities have been announced in China and most of these new upcoming capacities will be based on bio-synthetic routes. It is to be noted that most of the world scale plants are located near to the end-use industries and this trend will continue for all new projects during the long-term forecast. The oversupply situation to an extent is more likely to offset with robust demand owing to stringent policies on water-treatment, increase in oil & gas production and restructuring in the major economies as they step-out of the looming financial slow-down. In the long term forecast to 2025, the global acrylamide market is expected to grow at an annual average of 3.6%.

For more details on Polyethylene Market, please contact us at sales@prismaneconsulting.com

How can we help you?

Reach us with your research requirements and we shall provide the optimum solution to suit your needs.